Saddle up for Pro Rodeo 5 with two of our most proficient pro fighters. It’s a rollicking ring match with all the elements you crave, with the added touch of a bull rope!

If you don’t know Matt Maverick by now, it’s time you met the master. This Steve Reeves gladiator type goes head-to-head with hunky farmhand Nick Blackwell, who loves a good ol’ fashioned rodeo match. All too soon the gladiator is being dragged around the ring like a baby calf. The sight of a mammoth man like Maverick being bested is a site rarely seen.

Blackwell gets that rope around his neck, and Maverick grinds him into the mat, but Blackwell has experience on his side, entangling Maverick and hurling him into the turnbuckles. Soon Blackwell is whacking Maverick in the head like a punk kid, and crushing him with his own impressive frame.

But Maverick has other ideas, as he clamps that damn rope over Blackwell’s neck, pinning him hard against the mat until the long-haired farmhand is gasping for air, then whipping his challenger’s belly with the blunt end of the bull rope until it turns pink!

It’s a combination of hard-hitting fists, boots, insults, and so much more, in this tangle of rope so entrapping you’ll feel like a fly in a spider’s web. 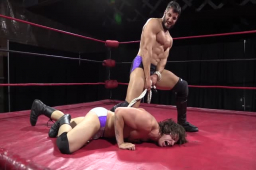