Out of the shadows a cloaked figure appears, climbing into the ring. He throws off his hood and a flood of light illuminates the familiar features of one devastatingly beautiful Z-Man, trying out his new "pro" entrance. He stands before his opponent, dramatically garbed in black from head to toe, and grinning that unforgettably boyish grin, like a puppy begging for a treat. "Nice robe," sneers Lane Hartley, completely unimpressed. So starts the rumble of Lane Hartley's bass-baritone delivering trash-talk and cock-teasing challenges like a total bastard from start to finish. Off comes the robe, revealing Z-Man's now legendary musculature. He and Hartley circle each other, Z-Man standing barefoot in red and black speedos, completely unintimidated by the slightly bigger man. In counterpoint, Hartley is booted and practically gleams in ass hugging Speedos. Hartley is taller. Hartley is bigger. Hartley is a little younger. Hartley is all chest and thighs and big, bulging muscle ass. But the one and only Z-Man is all heart. The men welcome each other to "Hotel Beatdown", and the fight is on.Chest pressed against chest, Hartley gains the upper hand, displaying an arsenal of aggravating "thou shalt not" moves. Face raking. Foot stomping. Even catty hair pulling. Z-Man is immediately pounded into Hartley's personal bitch, as the bigger man throws his stunning 210 pounds firmly on top of Z-Man's 170 pound frame while Z-Man gags and struggles valiantly. The pain continues with gut torture, pile drivers, long-held camel clutches. The camera moves in so close you can practically taste the pain. Will Z-Man turn the tables on Hartley? Or will the bigger man win the day?
Z-Man vs. Big DAnother competitor. Another chance to try out that cloaked pro entrance. Needless to say, it goes over just as well as it did before...If Hartley presented a challenge for Z-Man, just wait until he takes on beautifully beefy Big D. He speaks with a booming voice, and raises a skeptical eyebrow at the smaller man, in an expression that is both steamy and severe. From his massive torso to his glistening bald head, this guys looks like he should be working security at a club. And very fittingly, he bounces Z-Man from one end of the ring to another. These guys go at it fiercely, Jack and the giant, and Z-Man instantly regrets wearing the cloak. A gag one minute, a blindfold the next, Big D finds endlessly inventive ways to use it as a torture device. The size difference between these two gives the match an almost comical edge at first, which is a refreshing, light-hearted change from some of our previous material. But all too soon the punishment becomes all too dark, too rough, too painful. Z-Man is put through his paces, until he is literally gasping, groping, staggering blindly, and begging for an end."I got all day, buddy," Big D sighs as Z-Man struggles and strains against makeshift bonds. Big D uses everything against Z-Man, from the ropes to Z-Man's hair. This is punishment, pure and simple. The question is, how much can Z-Man stand?
Z-Man vs. Chasyn RanceZ-Man takes one final stab at his perfect, cloaked Pro entrance to face off with Chasyn Rance. And while the entrance is no better than before, Rance at least seems to appreciate the effort. It's difficult to describe Rance without using under-descriptive words like "perfect", "flawless", "gorgeous". He's tanned, toned, and sports some of the sexiest facial hair imaginable. From his cocky attitude to his playful wrestling style, he's the kind of guy you'd want to take a tumble with. You can practically feel the ring shake when the these pros lunge at each other and fiercely lock up. It's bulging arms and straining back muscles as these competitors rage against one another, grinning like schoolboys in an effort to further tantalize us. "What you got?" Rance asks, voice rumbling. Z-Man, at last, has found an even matchup. After the preceding punishments we've witnessed, it's great to see Z-Man back in his prime, taking on a fair challenger again, and these guys actually seem to be enjoying the tussle, rolling from one end of the mat to the other, testing out such moves as figure-four head scissors, camel clutches, indian deadlocks, and a sexy-as-hell, chest-to-chest grecco-roman-knuckle-lock. Will Z-Man win his third and final match against this playful, perfect opponent? 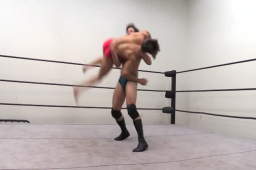