All the man wants to do is go to sleep!
Jimmy Jacobs enters a darkened wrestling ring...looking like hell. Dressed like a reject from RENT with a flamboyant scarf, jacket, and suitcase, all this pissed-off party boy wants is crash on the mat and get some much needed shuteye. Too bad the ring is reserved by somebody else.
Enter Brian Cage, a man of solid, glossy muscles, and solid, serious ways. He`s like something out of a comic book. Pecs. Abs. Arms. Thighs. Trapezius muscles like nothing you`ve ever seen before. All of which defies description. Let`s just say he`s huge. He`s not impressed with Jacobs` ways, and he`s quick to let him know in a measured, even-toned way. Too bad Jacobs is itching for an argument.
Stripping down to his underwear, the vivacious Jacobs and the massive Cage start things off with a test of strength, which soon has Jacobs eating his words. Mammoth thighs clamp around his legs, mammoth arms clamp over his neck, and powerful arms wrap around his back, lifting him up in a humiliating combo.
It looks like it`s going to be a squash job...but Jacobs is more than a mouthy asshole with a bad haircut. He`s a ferocious, and highly skilled wrestler with an almost suicidal style. He goes in for the kill, fearless, and fast. Most people would take one look at Brian Cage and run the other direction. Not Jimmy Jacobs.
Suddenly he`s lunging at the massive man, practically climbing him like a mountain, and applying all the pressure he can find on his ripped neck.
"Oh God...you`re a fucking beast, brother! I`ll give that to you! You`re a beast!" cries Jacobs, utterly dazzled by the bigger man`s mouth-watering physique. No matter what sort of painful position he finds himself in, Jacobs always has the dialogue to keep it lively, sometimes even putting his opponent off his guard and open to some serious abuse.
One attempted sleeper hold after another, earning this video its title, will have you seeing white right along with the fighters.
At one point Jacobs rides the giant`s back like a hobbit on a dragon, yanking his neck backwards while using the ropes for leverage. It`s like something out of an epic tale, as the sweat streaks down Cage`s bulging pectorals and baseball-sized abs.
Big vs. Small. David vs. Goliath. A brilliant back-and-forth battle that pits two astonishing talents against each other, all for the love of a good nap. 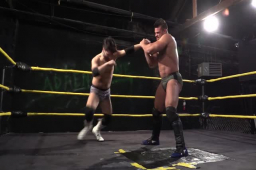