"On my farm, I tie people up..." says Nick Blackwell in a husky voice that sends chills up spines.
Blackwell`s farm, or course, is the darkened wrestling ring. And the star of this match is the long, white rope, used as both a device of pure torture and pure unity that sees two impressive bodybuilders hogtying, dragging, and driving each other insane. These guys do everything but dig spurs into each other. It`s more than a pro fight video...this is performance art and aggression perfectly combined, as two impossibly hot, and impossibly well matched men face off in a rope-themed rumble.
Welcome to Pro Rodeo 1, an all new video series, directed by brilliant Cameron Matthews!
Rhett Titus looks like the type you`d find roping steers in a summer rodeo. Only here there are no fringed shirts and cowboy hats. Here we cut to the chase. Titus rolls into the ring in nothing more than black knee-high boots and a sleek black speedo. His is a chiseled, blue collar body, baked brown in the sun and muscled with emphasis on thighs, pecs, abs, and cum-gutters. The bearded bodybuilder shows no fear when standing up to long-haired Blackwell.
Blackwell is in prime condition too, equally chiseled in arms and shoulders, with a lean, flexible back on full display in navy blue and black gear.
What starts off as a tug-o-war soon evolves into one of the roughest, rowdiest, rope burning battles of all time, as both fighters secure the rope to their wrists, and place themselves in just the right place for a violent pulling, gagging, and dominating fight.
Blackwell is tossed against he ropes, his tattooed pecs plainly displayed in a painful back-breaker brought about by a vicious hair-pulling session. Titus wastes on time in wrapping the endless rope around Blackwell`s wrists to he can`t get away too easily. Blackwell endures the pain inflicted upon him as Titus hogties his feet and drives him into the floor with the full weight of his own body.
At times these men are so tangled up in the ropes they seem to be nothing more than kicking, writhing piles of muscular limbs, lengths of rope, and grasping fingers yanking heads back by the hair. Despite the added elements, the match is completely competitive, and filled with punishing arm twists, sleeper holds, leg locks, flips, and merciless verbal and physical tie-ups.
Soon glossy chests are heaving and glistening in the light, backs muscles strain and long moans of agony grow ragged and weak, yet neither man is willing to give.
Soon Blackwell has Titus in a fierce floor sleeper, completing the combination by locking his powerful legs around him and rolling him over so he can better taste the floor that Blackwell intends to use him to wipe up. That`s when Blackwell remembers the rope can be used for more than tying and pulling...it`s ideal for vicious face-slaps too.
One man ends up tied up and useless. Will Nick Blackwell continue to kick Titus` ass, or will the bearded bodybuilder bounce back?
Join us for a rollicking rumble in the premiere of this new series! 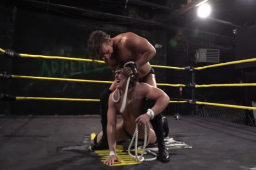