Nick Blackwell can't catch a break. The long-haired, handsome kid just wants to work out in the ring like a real stud, but every word that comes out of his prettyboy mouth is misinterpreted. Especially when he's around some of the dashing dudebros of the Cyberfights arena.
Enter Kharn Alexander and Matt Maverick. These guys are like the big brothers Nick never had...or wanted. Like all big brothers, they're ready to toss the long-haired punk around a little just to toughen him up. The entire session is treated with humor, bitch moves, and a playful attitude that is only offset by the obvious agony of the punished.
Kharn Alexander is the boss of this ring, all tattoos and a lean, tight physique. We've described him in the past by simply saying the ideal man wants to be Kharn Alexander...a pirate and a prince all rolled up into one. Today's no exception, as he struts his swarthy stuff in a pair of bright yellow speedos that perfectly frame his manhood.
Maverick is straight up Herculean, like something out of a gladiator show. This bearded, hot, hairy hooligan is truly something to feast your eyes upon. Especially with his cocky grin and those forest green lycra trunks. We're not sure he can even see past his own inflated pectorals. His washboard abs are so hard they don't yield at all, even when Kharn shoves a man the size of Blackwell into him at full-force...which is what happens first in this long-lasting, two-against-one squash-job!
Blackwell is trapped between the two bullies, who waste no time bumping and shoving him back and forth between them like a long-haired pinball. The sound of Blackwell's flesh slapping against the bare torsos of the more muscular men is the sound of pure, unintentional eroticism. Suddenly Blackwell finds himself in a hot half nelson, entrapped by Alexander's tattooed arm, while Maverick unleashes his wild side on Blackwell's exposed abs.
Alexander and Maverick are a perfect team, taking turns torturing the would-be tough guy, but also working together to hoist him into the air, only to drop him again with a classic "fucking good" slam.
Soon the two ball-busters are in a friendly competition of their own, taking turns slamming Blackwell, using his precious hair as a handle to lift him off the sweaty floor.
"Dumb and Dumber!" Blackwell manages to cough out, which only inspires the punishing duo to slam him at the same time. Double force means double pain for the punished.
Backbreakers, boots planted squarely in backs and abs, repeated hair pulling, and a particularly cruel "wishbone breaking" sequence involving poor Blackwell's legs are only the beginning. Wait until both black-booted blowhards wrap their powerful legs around Blackwell, one pair locking around his neck, one around his legs, while the stand-in big brothers demand to know who Blackwell thinks the ring belongs to. Blackwell, to his credit, holds out on giving them the answer they want, until he is nothing more than a sweaty pile of pain on the floor.
Will Blackwell bounce back? Or is this simply the squash-job of the century? 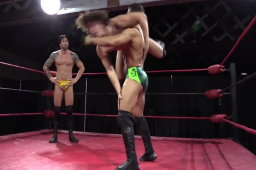