Mister E has a lot of nerve. He`s got an attitude. He`s impatient. He wears a royal blue mask to hide his features. One can`t help but think he`s making disrespectful faces under that thing. But the stunning heels of Cyberfights Wrestling Federation see right through that mask, and aren`t going to take this jobber jerk`s shit anymore.
It takes a lot of work to be Eddy Brock. Those arms. That chest. That mouth-watering, tattooed back and body. But when Mister E has the nerve to get in the pink-haired heartthrob`s face, Brock steps up.
"Why you wearing a mask?" Brock demands of the blue garbed punk.
"Why`s your hair pink?" Mister E retorts.
Nobody insults the pink mohawk. And the fight is on. But it`s not much of a fight. It`s more of a slowly relished punishment session. Brock sits back and enjoys the beating he`s dishing out, grinning like the cat who ate the canary. He`s serving up one cruel maltreatment after another. Clawing his chest, locking his head in every possible uncomfortable position, and actually covering E`s mouth with his meaty hand to stifle the meaningless moaning. Mister E, through his mask, groans, gasps, whines, and pleads beautifully. Pure pain never sounded so hot.
Enter Ethan "Axel" Andrews. He`s the grown-up version of that boy everybody had a crush on in high school. Lean, lithe, with a calm, cool confidence. He seems like the kind of guy who ought to be kicking back with a beer rather than kicking ass in the ring, until he meets somebody who pisses him off. Mister E, still masked and talking smack, manages to do just that. It is a total pleasure to watch Axel`s slender frame going to work on the mouthy, masked jobber. Within seconds Axel has E pinned to the mat, sitting square on his face, stretching out both of the sobbing jobber`s legs. With Axel`s balls planted firmly in E`s face, we are treated to a symphony of breathless, struggling sounds, that could be either exhalation or agony.
"We`re not even five minutes in and you can`t do shit to me!" Axel laughs, before punching and pounding the jobber`s heaving torso while holding him in a fierce figure four. One of the hottest, most confidant wrestlers we`ve ever featured has a field day with the masked man, even delighting us with a wild, surprise bondage sequence. How will Mister E ever look Axel in the eyes again?
Old fashioned arm wrestling is Lane Hartley`s game when he faces off with Mister E. What starts off as a gentlemanly contest soon escalates into a full on, abdominal kicking, body tossing, bitch beating battle of strength and endurance. As if he knows what`s in store for him, Mister E literally begins begging pathetically for mercy before the match has ever started. If you want to see home much pain a masked man can possibly take, this is the title for you. You`ll watch the little bitch weaken. You`ll wince. And you`ll wish, briefly, that you could swap places with him when Hartley crushes his head between his thick, muscular thighs.
This is the squash job of the century. The real mystery is how Mister E manages to survive! 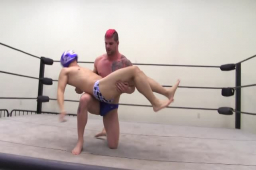