In Cheap Shots and Low Blows 3 we brought you the battle of two massive men. In counterpoint to that, we now bring you the battle of two cute boys with Cheap Shots and Low Blows 4. If you want to see adorable young guys with cute faces and approachable styles beat and batter each other, you`ve come to the right place.
Jimmy Jacobs has been lovingly described as the Charlie Day of wrestling. With his punk attitude, smash-mouth, and compact frame, he`s the perfect opponent for young Nick Justice, the Chris Pratt of wrestling, our adorable "Average Joe".
From the moment this match begins, we know we are in for something special. These guys both have a lot to prove, so much that they smash together like two battering rams. But when Justice accidentally brutalizes Jacobs` package, the gloves are off. One barbarous ball beating after another leaves each man crumbled on the floor. Boots to balls, punches to peckers. At one point we actually watch in sadistic glee as Justice crawls to the corner in broken defeat, only to bounce out of the way just in time for Jacobs to get ensnared in the ropes by his legs, allowing the Average Joe to grind his balls with his boot and manipulate Jacobs` legs like a row boat, all while the pink-haired hero screams like a girl.
"Why don`t you just stay down!" Justice barks.
Jacobs comes back with head-butts to the boys abs, a tumbling attack that raises Justice`s voice up to the rafters.
"That was not nice..." he moans in a full soprano. Jacobs just laughs.
Nest it`s time for kicks to the chest, nipple twisting, leg wrenching, and backbreakers. One man is left with his ass in the air, practically sobbing.
"I hate you so much..."
Perhaps the most enjoyable portions of this match are the moments when both men hurt each other at the exact same time, leaving both in pain, hands protecting their precious, recently damaged junk. Soon the dares and bitch moves become more frequent. Hair pulling, stomping, tests of strength, and rough rolling on the floor action...legs and arms intertwined, sweat mingling together, and one package attack after another.
These guys are perfectly, equally matched, not just in size and skill, but in sense of humor. The back-and-forth threats, jokes, and one ups will keep you smiling, even as you beat your meat...even as they beat each other senseless. Which man will be left gasping for air in total broken defeat? 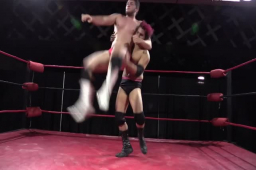