Gladiators. That`s the only way to describe these two grinning gargantuan guys. Both are massively muscular, thick, hard-bodied, and strong. Once upon a time men like this were bred specifically to fight each other. This is a match made in heaven. Sampson versus Hercules.
Danny Duggan is a golden-skinned, golden-haired hero right out of the golden age of sculpture. Replace his snug-fitting fight shorts with a loin cloth, or nothing at all, and you`ve basically got the statue of a Greek hero brought to breath-taking life.
Matt Maverick, on the other hand, looks like something out of the 300 movies. Black boots, black trunks, scrufftastic black beard. This guys is to the minute in style, and his body is like something out of a cum-splashed wet dream. Abs that stand out for miles. An ass that will not quit. Muscular thighs you`ll long to have your head caught between. And those arms... This is a man you could wear your tongue out licking from head to toe and back again, and man, can he put up a fight.
And speaking of fighting, these guys fight with nobility. There`s a mutual respect between these two muscle gods, and sort of evenness and bravery especially prevalent in their dancerly moves. When they lock up in a circle of bulging biceps and pressing back muscles, it`s like watching two giants collide.
At one point Duggan muscles Maverick backwards with just his bare hands, until the dark-haired hunk is in a full arch, booted feet planted firmly on the floor, bearded face twisted in agony. Suddenly, Duggan is lifting his opponent up again, and they are face to face, true competition. Real men.
"That`s some good wrestling right there," says Maverick, reaching out for a knightly handshake. "Good stuff."
"That`s what I think of your wrestling!" Duggan says, suddenly turning on a dime and knocking the dark knight to the floor, following up the surprise attack with the single hottest camel clutch imaginable. But Maverick is too powerful for that, and he responds with the brutal ball abuse that makes these new titles so exciting. To see such big men compromised is a total thrill, like watching an unsinkable ship slowly fill up with water. Wait until the charging attacks inflicted upon one man who is backed against the ropes in bewildered agony. The sounds of fists agains unprepared packages will make you wince.
Watch in astonishment as Duggan lifts massive Maverick into the air, only to drop him full-force onto this outstretched leg, reaching a whole new lever of ball abuse, followed by a glorious pin.
Which of these stunning specimens will take the final fall? Does it matter? When real men fight, everybody is the winner. 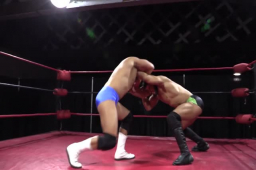