We welcome you back to the world of Cheap Shots and Low Blows by giving you a glorious matchup, two long-haired hunks who look like they`re going to destroy one another from the moment they set eyes on each other. Equals in size, style, and hotness, you`ll be hard pressed to pick a favorite out of these two sexually aware individuals. Each man walks the ring like a true pro...each looks like he belongs on top. So who will win?

Nick Blackwell, known professionally as "King of the Atomic Drop", has the powerful arms and chest any man would dream of having. With his tight torso, flowing locks, and his big, bangin` ass, it`s easy to root for him.

Jimmy Stanton has a cool confidence that is totally appealing. With his two-toned locks, muscular thighs, and his smack-talking mouth, he might be the one to look out for. From the moment he enters the ring, he is all trash-talk and teasing, showing a calculating contempt for his opponent`s tribal tattoos and overall look. With one squarely aimed punch to the pec, the fight is on, and the hair goes flying every which way.

These guys go rolling across the floor, grinding elbows into each other`s bodies, pulling hair, twisting legs, knee-dropping, arm wrenching, and constantly arguing. Nothing is off limits when it comes to the back-and-forth fighting. They argue about national attitudes, cultural differences, stupid body art, and about who has the best hair.

These guys are all over each other. Someone is almost always being sat on or crushed in some way, usually with a handful of luxurious hair gripped tight in the punisher`s fist, and usually while some sort of argument is going on...often in strangled tones.

"I can go back to eating Fruity Pebbles," Stanton laughs as he presses down hard on Blackwell`s neck. "Just go ahead and quit." But Blackwell decides instead to return the favor, clamping a brutal headlock on his opponent that is countered only when Stanton reaches back and yanks on Blackwell`s hair.

"You wish your hair was as good as mine," Blackwell taunts.

Stanton`s answer to this? Ball abuse of the highest calibre, a tactic that is only mimicked by Blackwell in a fierce give-and-take that will have your cock throbbing in pleasure as their cocks throb in pain.

Watch as these men gleefully and fitfully rip each other to pieces, until one man is left clutching his junk in total agony. 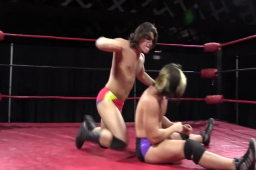