It just doesn`t get any better than this. Two guys, each one hotter than the other, facing off in an aggressive battle of bodies and wills... Jimmy Jacobs has NEVER looked better. This dude is looking stronger, leaner, and more ready than ever to mix it up with any guy, most of whom end up being bigger than him, but he doesn`t even blink when a big guy walks up to him with a fight in his eyes. Jimmy Jacobs could probably fight the world all at one time and still never blink. And with a dog collar chain, nipple piercings catching the light, and that shock of red hair standing out in the middle of his raven-black mohawk...hair that he is rightfully proud of...well...how could anybody not want to take him on? Long-haired Nick Blackwell has his work cut out for him. The man`s ready to rumble, walking right up to the always raring to fight Jacobs with an unapologetic air that Jacobs calls ego. Blackwell is looking flawless, with an upper body featuring the desirable broad shoulders, chiseled pecs, and washboard abs in a long torso, all narrowing down into a perfect V that is only broken up by bright red trunks. That lion`s mane of his is practically begging to be pulled. "You`ve got a big mouth for a little boy," Blackwell says to Jacobs, calling him out, sounding almost like an ex-boyfriend who knows him too well. "You ready, big man?" Jacobs dares. Lockup! Jacobs throws an arm around Blackwell`s neck, forcing him instantly to his knees. But Blackwell is no newbie, and soon he`s laying into Jacobs with some arm-wrenching punishment that had both bodacious bodies working hard to make an impact. Now we remember what these matches are all about. Jacobs chops the shit out of Blackwell`s back, striking hands hammering down on the taller competitor, until he`s huddled in the corner, only to be dragged out by the big-mouthed brawler that is Jacobs. "Smile, you dumb cunt!" Jacobs orders and he drives Blackwell`s prettyboy face into the floor. Blackwell rolls it out and rolls on top, tying Jacobs up with just his limbs as if they were made of rope. Seeing Jacobs choking himself with his own arms while Blackwell lays on the pain is almost unreal because for once Jacobs can`t fucking speak! Too bad for Blackwell his competition is a quick study. In a flash Jacobs is laying the same punishment on Blackwell, all while reading his arm tattoos in a mocking way. Brilliant. Brutal. Face slapping, torso crushing, scissoring punishment, all building to an over the knee backbreaker that beautifully displays one man`s stretched out, flawless torso, while he struggles to regain his balance and dominance. In a new twist, the man being punished reaches up and yanks the hair of his enemy as hard as he can. So starts the hairpulling portion of our fight! Hairpulling is rarely accepted as a tactic in erotic wrestling, but there may be nothing that renders a man more vulnerable than a handful of hair in his enemy`s grip while he`s trying to pull away or gain leverage. And these bastards don`t pull hair like bitches in a catfight. Hell no! They yank, twist, and wrench those sweaty locks with all the roughness of a school bully on speed. Amazingly, the hair pulling portion totally has an erotic edge to it. While no overt sexuality is ever displayed between these men, it is undeniable that the sight of two muscular males, fingers locked in deadly grips in another man`s hair while the two roll, kick, curse, threaten, and humiliate each other, is highly erotic. "Come on, Sampson! Don`t your hair make you strong!" one man barks at another as the fight rages on the floor. Watch as one man literally mops the floor with his opponent`s face, using that hair to maneuver, all while unleashing a never ending battalion of insults and trash talk that elicits some pathetic moans from the man on the receiving end. As if hair pulling wasn`t punishment enough, add the element of shoe torture with a filthy boot wiped all over the man in peril, shoelaces used for choking...add all that to the mix, and you`ve got a match made in hell for one fighter. "You gonna do something? You gonna fight? Fucking fight! Fight now you shit-eating, cock-sucking cunt!" one fighter barks as he simultaneously chokes, hammers, and pulls hair. If you`re all about supreme punishment, constant humiliating and trash talk like you`ve never heard before, then return to the ring, for Body Chopped and Sleepered 2. 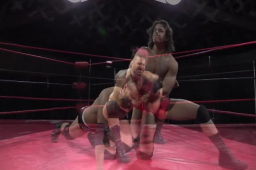